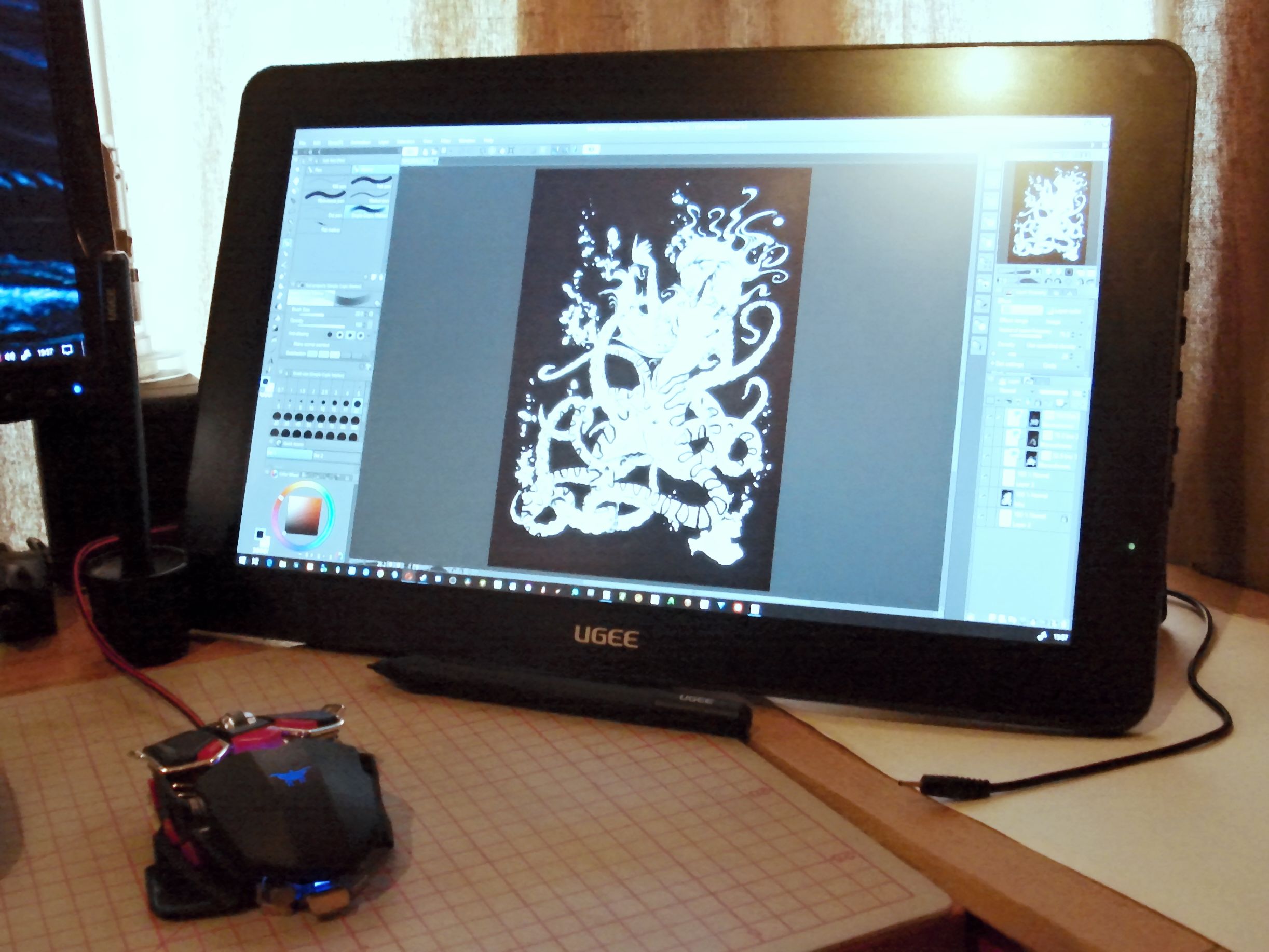 There was a time when Wacom was the only serious choice for digital artists. These days there is a wide range of alternatives to Wacom's drawing tablets from various companies. Ugee is one such company from China and their HK1560 display tablet is a decent cheaper alternative to the smaller end of Wacom's Cintiq range.

What's in the box?

The HK1560 is a display tablet with a 15.6" IPS screen running at 1920 x 1080 HD resolution. The clean design features buttons along the right hand side of the screen, a power button at the top and 4 other buttons to navigate the monitors display options menu. A red/green LED on the front right bezel indicates when the display is powered on or off.

As far as the display options go they are fairly limited. You get options for several display presets (mild, standard, dynamic and personal) and individual controls for contrast and brightness. Despite this I was able to eyeball the screen to match my main monitor fairly closely. There are some other options in the menus but they appear to do nothing when i have tried them.

On the rear of the display are ports for the power supply, HDMI, and USB. All of these are required for using the device, the HDMI for the display and the USB for the tablet side of things. These ports are sensibly positioned so that the cables plug in along the left hand side instead of at the bottom like some display tablets. This avoids the problem of cables being bent and placing unnecessary force on the ports when adjusting the orientation of the stand.

Speaking of the stand... The metal base has rubber feet on either end to stop the tablet slipping. The stand is adjusted by lifting a simple lever at the top and then raising or lowering the screen to whatever angle you want. The display seems fairly stable at any angle with little flex, but then I don't tend to press particularly hard on the screen. If you don't want to use the desk stand you can always detach it and replace it with a standard VESA mount stand or arm. I have been considering doing this but purely for desk space reasons, the default stand is very good as it is.

As usual the device comes with a Disc containg drivers but it is recommended to download the latest drivers from ugee.net especially if you are using Windows 10. A couple of major Windows 10 updates (such as the recent April update) have interfered with regular use of the tablet, like pressure sensitivy no longer being recognised. Thankfully Ugee seem very quick to release updated drivers that fix these problems.

The driver software is fairly simple but pretty much does everything it needs to do. The sotware comprises of one window seperated into 5 tabs. The first tab tells you which version of the software you are running along with two options for showing an icon in the system tray for quick access, and an option to support Windows digital ink. 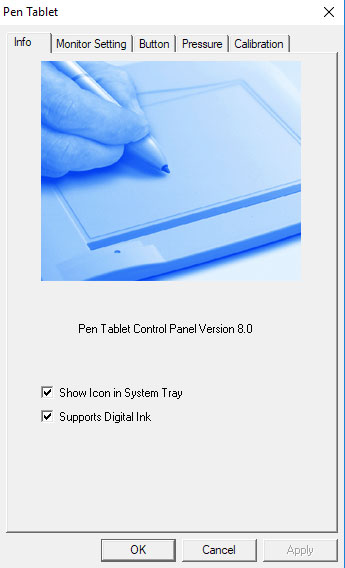 In the second tab you can select which monitor the tablet drawing area is restricted to or define a specific region. I am currently using the HK1560 with two other monitors and it works fine in this setup. It would be nice if there were also an option to define a shortcut enabling you to swap monitors freely as occasionally a window will pop up on a different screen and it is necessary to switch to my mouse to intereact with it. 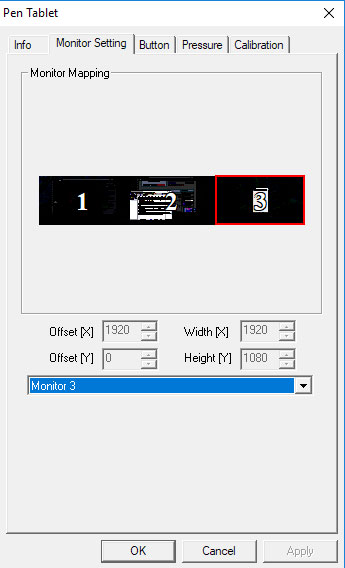 Tab three defines the functions assigned to each of the two button on the stylus, and the speed at which doubl clicks are registered. This area is quite limited as you can only choose from a handful of mouse options (left click, left double click, right click etc.). While this isn't really a problem as I don't make use of the buttons for much anyway, it would be more useful if there was more freedom to define additional system options and macros here. 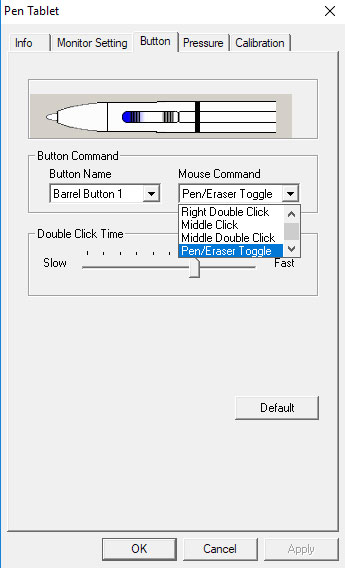 The fourth tab allows adjustment and testing of pen pressure with a slider for intensity and a small scratch pad to scribble on. It's pretty basic but does the job. lastly is the calibration tab. Here you can choose four point or nine point calibration which will send you through the calibration process where you click on the points displayed on the screen. 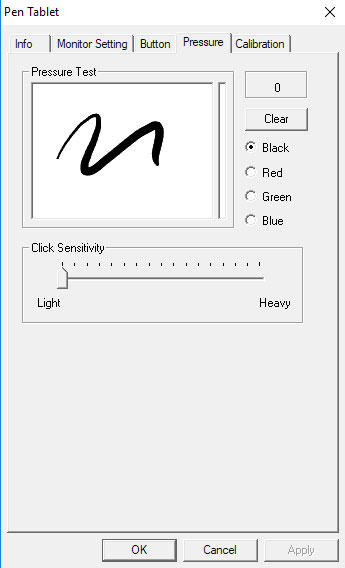 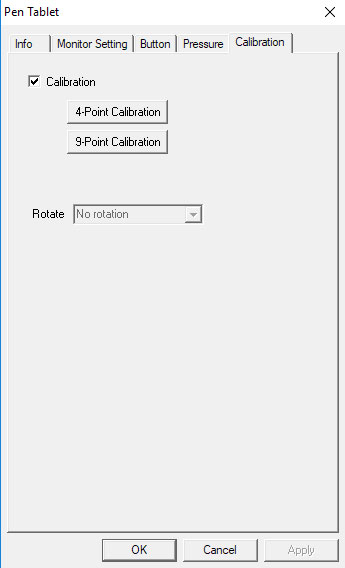 The stylus is light and comfortable to hold, most of the main body has a rubberised surface preventing it from slipping through your fingers. There is a rocker switch for front and rear buttons which can be cofingered through the previously mentioned driver options to perform standard mouse button functions.

The Ugee pen is rechargable via a USB cable which plugs into the top of the pen, and can still be used while charging as long as you don't mind the cable sticking out of it, and as long as you have a USB port close enough to reach the screen comfortably. The charging cable is actually fairly long (approximately 1 metre), so shouldn't be a problem for most people. Luckily you don't have to worry about this as the HK1560 ships with two pens and two charging cables, so you can charge one while using the other, as well as the fact that each charge lasts quite some time. Also included is a small stand/rest for the pen which unscrews to reveal eight spare tips and a small extractor to remove the existing tip.

Because the charging cable plugs in to the top of the pen there is no eraser on the pen as there is on Wacom styluses (styli? Penseses?). Personally this doesn't bother me at all as I rarely ever used the eraser on my Wacom tablet, prefering to instead use a shortcut to switch to the eraser tool (or in Clip Studio Paint, painting with transparency with the current pen). I have always found this approach to be faster and more accurate, but if you are the kind of person that likes flipping your pen upaide down to erase mistakes then this is not the device for you.

Painting and drawing and stuff

When it comes to actually drawing and painting the Ugee HK1560 performs very well. The screen has a slightly matte feel to it which is enough to stop the pen tip sliding around, but not rough enough to interfere with the smoothness of you line. Strokes are responsive and accurate with no noticable lag.

The 2048 levels of pressure provide excellent graduation when drawing lines of variable thickness and opacity. Due to the thickness of the screen glass there is a slight amount of paralax but it's only really noticable if you are not positioned directly over the cursor.

Prior to the HK 1560 I used a Huion 1060 which failed to provide pressure sensitivity in Photoshop, but the Ugee has no such problems and so far this tablet has worked with every piece of software I have tried it with including, Zbrush, Photoshop, Painter, Artrage, Sketchbook, Clip Studio Paint.

Generally I am very happy with the Ugee HK1560 with my only reall issue being the size of the display (15.6 inches can make text and icons in some software very small), and if I had more money availble I may have prefered to go for a larger display tablet instead. Overall build quality and software are maybe less refined than more expensive tablets, but the Ugee works very well so far and is a good value alternative.

A Windows update this month (KB5003637) causes issues with the driver for this and other Ugee tablets. One solution (provided by Ugee support) is to uninstall this Windows update, however this did not work for me. Ugee no longer provide drivers for this tablet.

Until that happens I shall continue to "review" my 8 year old second-hand Integrated graphics.

Banj replied the topic: #30588 11 Aug 2020 13:06
If XP-Pen want to send us some tablets to review we would be happy to, then maybe they wouldn't need to spam internet forums to promote their products.